There will be a Special Meeting on Monday, July 10, 2017 at 6:30 p.m. so that Brooklawn Council may vote on several Ordinances in advance of the July 12 Planning and Zoning Board meeting, said Borough Adminstrator Ryan Giles. Those Ordinances include several that relate to a new Wawa that is targeted for the Metro Diner site.

The July 10 Special Meeting is being held in advance of next scheduled Planning and Zoning Board meeting, which is when the application for a new Wawa convenience store is scheduled to be heard.

Five Ordinances were reviewed and discussed during the special June 21, 2017 Brooklawn Planning/Zoning Board meeting. Several of these Ordinances relate to Wawa and others relate to amending the Borough’s Code to include “limited breweries,” which are also known as craft breweries.

The Ordinances, which SJO requested, were provided read and in part:

Adds the definition of a limited brewery, which reads as follows:

A commercial facility, which shall not sell or serve food or operate a restaurant, which brews any malt alcoholic beverages in quantities for which it is licensed by the Alcoholic Beverage Commission and which sells the product at retail to consumers on the licensed premises of the brewery for consumption on the premises but only in connection with tours of the brewery, or for consumption off premises in a quantity of not more than 15.5 fluid gallons per person, and to offer samples for sampling purposes only. “Sampling” shall mean the selling at a nominal charge or the gratuitous offering of an open container not exceeding four ounces of any malt alcoholic beverage produced on the premises. 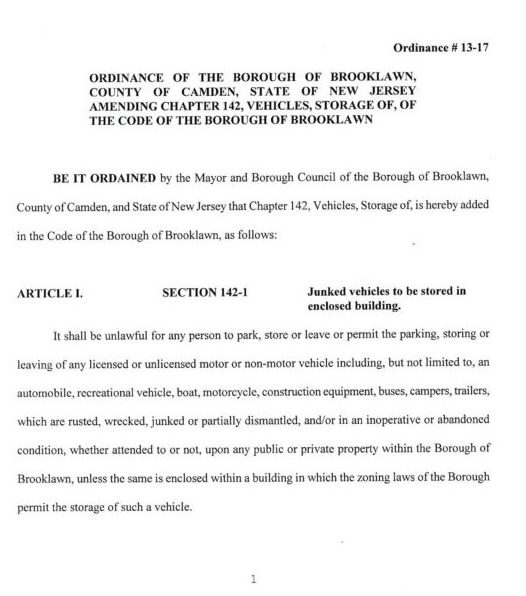 Addresses prohibited signs and states, in part, that signs are not to give off intermittent or rotating beams or strobe lights upon any part of a residence and or commercial building. This Ordinance also addresses signs for awnings and canopies.

Relates to the zoning map and districts, regulations for Redevelopment Area Overlay Zone, the considerations for gas stations, and also addresses the height of fences and walls.

Relates to lights on public streets and adds the following Land Use definition to the Borough Code:

Convenience Store With Motor Fuel Dispensing: In Block 101, Lots 2, 3, 5, and 6 of the Brooklawn Redevelopment Area only, a retail establishment operating 24 hours per day, 7 days per week, offering for sale prepackaged food products and grocery items, hot and cold made-to-order drinks, freshly pre-prepared foods, including sandwiches, soups and salads, household items, tobacco products, newspapers and magazines, in-store ATM and lottery, and which includes outside facilities for dispensing motor fuels, gasoline and diesel fuels for light trucks and passenger vehicles. No servicing of motor vehicles is permitted, excepting up to two (2) external air pumps may be provided.

The Planning/Zoning Board hearing on the Wawa application will take place on Wednesday, July 12 at 7:00 p.m.

To view all of the Ordinances in their entirety, click the image below: 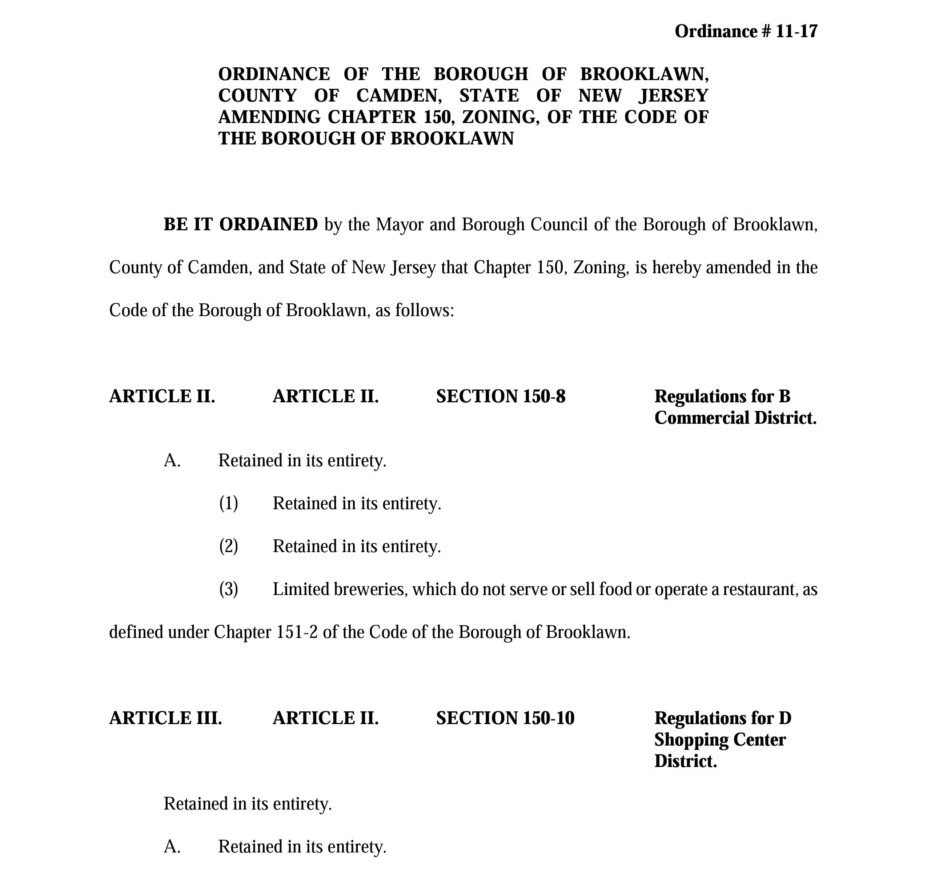